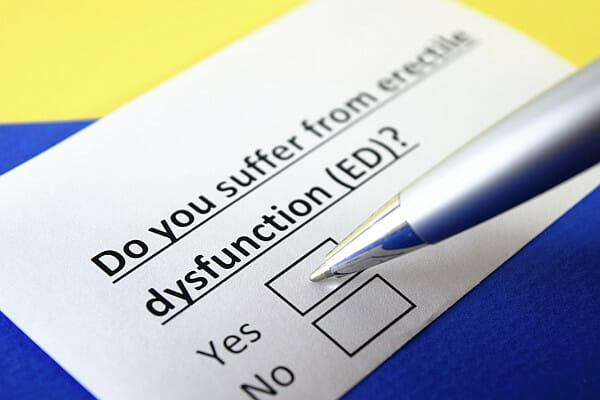 Causes of ED Can Be Physical or Psychological, or Both

If you can’t perform in the bedroom, that means there’s some kind of physical problem somewhere, correct? Well, not necessarily- it is often more complicated than you may think.

What Is “Physical ED”?

Physical ED or, as experts call it, “organic ED” describes erectile dysfunction that has a physical cause. The most common underlying cause is problems with the blood vessels of your penis. Any issue impeding blood flow within the penis makes it harder for you to get or maintain an erection. Other physical issues causing or contributing towards ED include problems with your nerves or hormone levels.

The progression of organic ED tends to be gradual. So a man may only notice a subtle decline in his erectile performance over time. If the underlying cause is physical or predominantly physical then erection problem is likely to occur all of the time. That means that the weakness is present both during sex with your partner and during masturbation. Also, if you are a man suffering from physical ED you will probably notice that you no longer wake up with erections in the morning. Similarly,  you may notice that you are no longer experiencing spontaneous erections during the night.

What Is “Psychogenic ED”?

Experts define “psychogenic ED” as erectile difficulties that are caused by psychological issues. These issues can include problems with your relationship, problems with your partner, sexual phobias, depression or other mental disorders, stress, sexual anxiety or dysfunctional attitudes toward sex. As previously mentioned, in men under 40, psychological factors tend to be more common than physical factors in causing erectile dysfunction.

If erectile problems suddenly pop up when you’re with a new partner or find yourself in a new situation then the ED is most likely of psychogenic origin. Unless you have suffered a recent injury ED with an abrupt onset tends to be psychogenic ED. Men with psychologically-based ED may find their erectile issues come and go. Most men with psychogenic ED will still wake up with spontaneous erections. This means that it’s not physical ED as the blood supply to the penis is still intact.

So How Can You Tell the Difference?

Physical and psychological ED often pops up with different signs. Where does yours fit in?

Is it Physical ED or Psychogenic ED?


based on article from Asian Journal of Andrology


ED Can Be Both Physical And Psychogenic

Physical and psychological ED can overlap. For example, men with poor blood flow to the penis may become anxious about their difficulty in getting an erection. And this psychological worry in turn makes it harder to get an erection. Also, men with psychological ED, due to stress or being with a new partner, may actually have a contributory but underlying physical problem. A doctor will need to determine which types of erectile dysfunction a man is suffering from. This is a prerequisite to deciding what would be the best way to treat the condition. So before meeting with a doctor, it is helpful if you keep a log of when your erectile problems occur and how you were feeling at the time.